What do we do with the monster buildings? 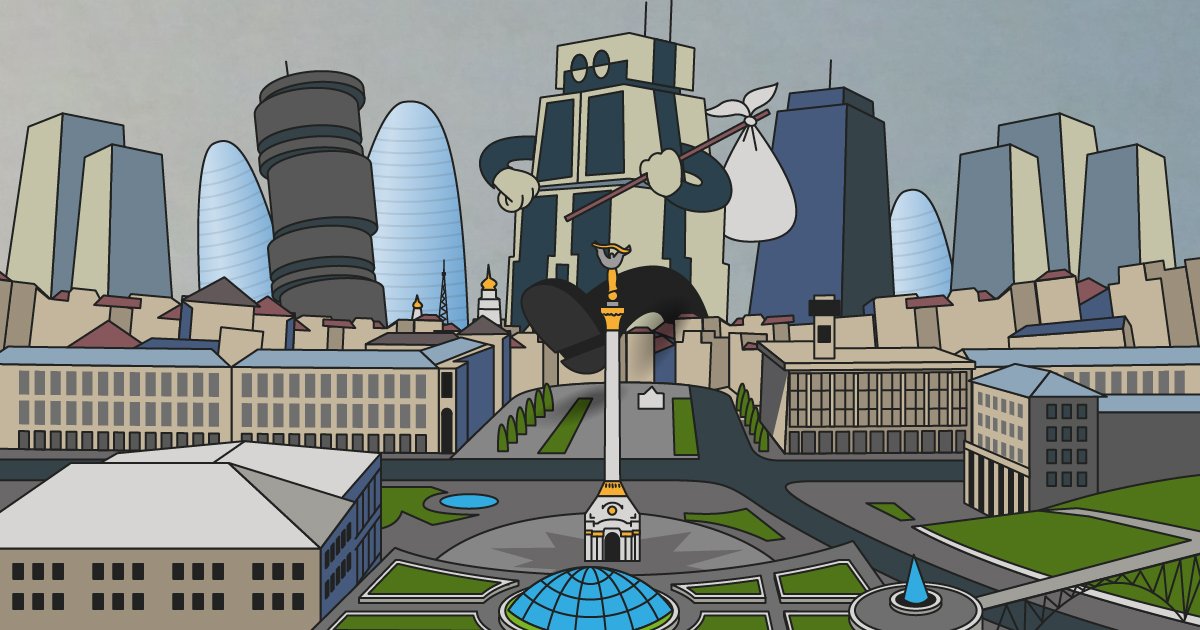 The Ukrainian capital is the European champion by the number of skyscrapers in the city. It is followed by London, Moscow and Kharkiv. In the global Skyscraperpage ranking, Kyiv has the 7th place, right on the heels of Chicago. But these positions do not mean that its skyscrapers are the tallest. There are just a lot of them.

In the Soviet era, the Kyiv Pechersk Lavra was the threshold of height: nothing taller than the Lavra was allowed to be built. Even the Mother Homeland’s height was reduced to avoid breaking this rule. Now, however, the central part of Kyiv has about 100 buildings included into the list of “disharmonious structures.” They are to be either demolished or visually neutralized.

From churches to skyscrapers

In the early 20th century, as elevators, escalators and indoor plumbing were introduced, Kyiv reached the first place in the Russian Empire in terms of height of its residential buildings. Until 1963, mostly five-story buildings were constructed in the city. In the Soviet period, the capital significantly expanded in area, becoming surrounded with residential districts made up of 9- and 16-storey buildings. Still, the architects tried to preserve harmony.

Nowadays, however, Kyiv residents are losing sight of the usual view of Khreshchatyk from Bohdan Khmelnytsky Street. Kyiv is growing upwards: it makes the cost of housing lower. Detailed territory plans propose buildings of up to 27 floors in Osokorky and Pozniaky districts. New churches are lost amid high-rises which allow their residents to look down at God from the top.

In 2015, UNESCO demanded to reduce the number of floors in high-rises in the buffer zone around Kyiv Sophia and Kyiv Pechersk Lavra by demolishing some illegally built floors. Since 2018, Ukraine has limited the maximum height of residential construction depending on the categorization of localities and the number of residents. In Kyiv, the current General Plan presupposes construction of buildings no taller than 27 meters above the ground level in the central planning zone until 2020. In practice, this requirement is ignored.

Which buildings must be demolished or shortened

Disharmonious buildings can be seen from almost all viewpoints in the city. For instance, the skyscraper on 7 Klovska Street looms tall not only when it’s viewed from the left bank. It can even be seen from the Jordan Lake in Obolon.

Similarly, the building on 9A Hrushevsky Street, where, according to Ukrayinska Pravda, President Volodymyr Zelensky used to live, also needs to be partially neutralized and partially demolished. According to the media, instead of the permitted 15 floors, the developer built 22, and one of the apartments in it could have belonged to Viktor Yanukovych. In Podil, the scandalous building on Verkhniy Val street falls under the category of buildings that need to lose a few floors. Skyscrapers around the central city Department of Registration of Civil Status Acts (the “Bermuda Triangle”) have also ruined the architectural ensemble.

We should note that the Parus office building and the Gulliver mall are required to undergo visual neutralization. It’s a method used to make a building fit into the architectural ensemble around it, for instance, by painting it, adding plants or decorating. But it’s hard to see how visual neutralization could improve or hide a concrete-and-glass skyscraper.

The planners of the city’s General Plan note that there are hundreds of such structures in Kyiv, but the owners of the properties have to be compensated by the city government for their demolition. Kyiv residents probably remember the scandalous construction and demolition of the Troyitsky Mall near the Olimpiysky Sports Complex. The mall building, constructed in the square in front of the stadium, did not fit in and interfered with the Sports Complex’s reconstruction. In 2008, it was demolished for a hefty price. According to Ekonomichna Pravda, the compromise with the developer cost over 248 billion hryvnias from the city budget and the allocation of a land plot in the Expo Center territory. It would be much better if we could prevent such structures from ever being built.

The Institute for the General Plan of Kyiv announces public hearings on the draft General Plan after the quarantine ends. Send your comments and proposals to [email protected] or to 01001, Kyiv, 32 Khreshchatyk Street.