Resumption of reporting by political parties is under the threat: the Committee did not support some proposals of Zelenskyi 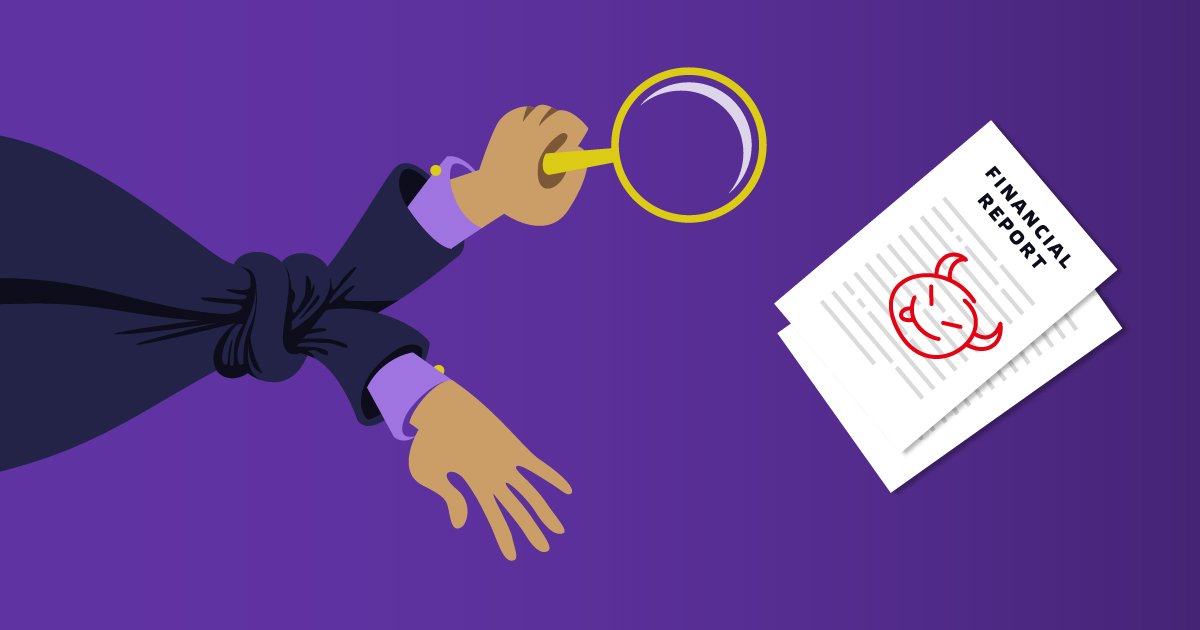 The Committee on Legal Policy did not support 2 out of 5 proposals of Volodymyr Zelenskyi, who had vetoed draft law 5253-1 and sent it to the Verkhovna Rada for revision.

The failure of at least one proposal at the plenary session postpones the resumption of reporting by political parties indefinitely, and the state funding of parties will finally turn into donations of budget funds for parties, which they have been using uncontrollably for more than 1.5 years.

Thus, the Parliament will, in fact, block the reform of political finance in 2015, which had to reduce influence of oligarchs on activities of political parties.

Draft law 5253-1, in its latest version, was supported by the Parliament in the second reading on November 2. The essence of the draft law is to regulate the procedure for stopping state funding of parties. At the same time, one of the most important proposals of the draft law is to restore the obligation for political parties to submit their quarterly financial statements. In March 2020, when they made amendments to the Law “On Political Parties in Ukraine”, the Parliament released parties from this obligation until the end of quarantine. As the quarantine continues (and it is unknown when it will end), such easing can be called indefinite.

In practice, this means that taxpayers and voters have been deprived of access to information on expenditures of state funding, which parties continue to receive despite the lack of reporting (in total of 1.5 billion in 2020 and 2021). Also, parties were given the opportunity not to report on the origin of private funds, which were attracted at least in the amount of 1.4 billion UAH last year alone. 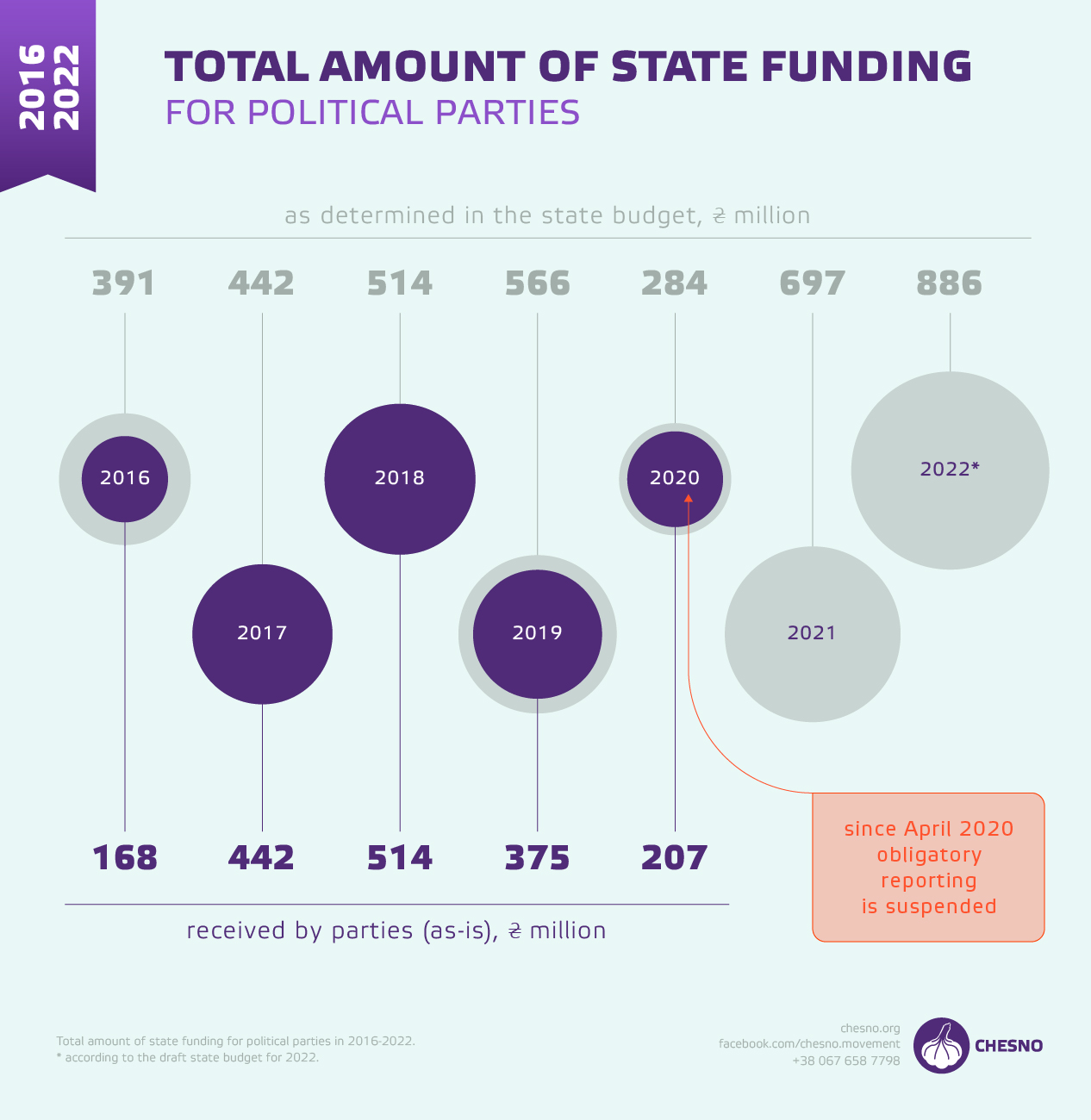 In 2020 and 2021, parliamentary parties received from the budget almost 1 billion UAH of state funding for statutory activities and another almost 0.5 billion as compensation for expenses of the election campaign.

Although Members of Parliament, including head of the Legal Policy Committee Andriy Kostin, stressed the need to resume reporting, but this never happened. They voted for the submission of reports that have not been submitted since the beginning of 2020, Members of Parliament failed to vote for the exclusion from current version of the law provisions that allows not to submit reports until the end of quarantine.

As the full resumption of reporting did not take place, the Rukh CHESNO and more than 60 other organizations sent the appeal to the President to veto the draft law and return it to the Parliament for revision.

Few days ago, Volodymyr Zelenskyi vetoed the draft law and sent 5 proposals to the Verkhovna Rada, which take into account, among other things, three proposals set out in the public appeal.

In general, the list of the presidential proposals is as follows:

1.   to exclude from the draft law the provision that allows to avoid reporting for significant part of financial obligations of political parties;

2.   to change the procedure for obtaining/refusing state funding (the proposal stipulates that such decision is made at the congress of political party, or by the majority of the parliamentary faction);

3.   the time limit of validity of the provision on “covid charity” (the provision proposes that goods, works and services distributed by third parties on behalf of the party or under its brand should not be considered as contributions until the end of quarantine);

4.   to exclude from current version of the Law “On Political Parties in Ukraine” provisions that allow parties not to submit financial statements;

5.   to exclude from the draft law the provision which provides allocation of additional state funding for political parties in 2022 which they underreceived in September-December 2019.

During consideration of the presidential proposals at the meeting on Thursday, November 25, the committee supported 3 out of 5 proposals (1, 3, 4), and did not give enough votes for the other two proposals (2, 5).

If proposal on allocation of additional budget funds to finance parties remains in the draft law (the presidential proposal proposes to exclude it), then it will be received not only by parliamentary but also by non-parliamentary parties, which in elections in 2019 received from 2 to 5% of votes.

Although new convocation of the Parliament deprived all non-parliamentary parties of state funding (since October 2019). According to explanation of the NACP, they have the right to such funding for the period from the first meeting of new convocation of the Parliament (August 29, 2019), and until the date of entry into force of amendments in the law that deprive them of this funding (October 16, 2019), namely for one month and a half. Until now, non-parliamentary parties didn’t receive these funds only because the Cabinet of Ministers did not make necessary amendments to the budget in 2020. 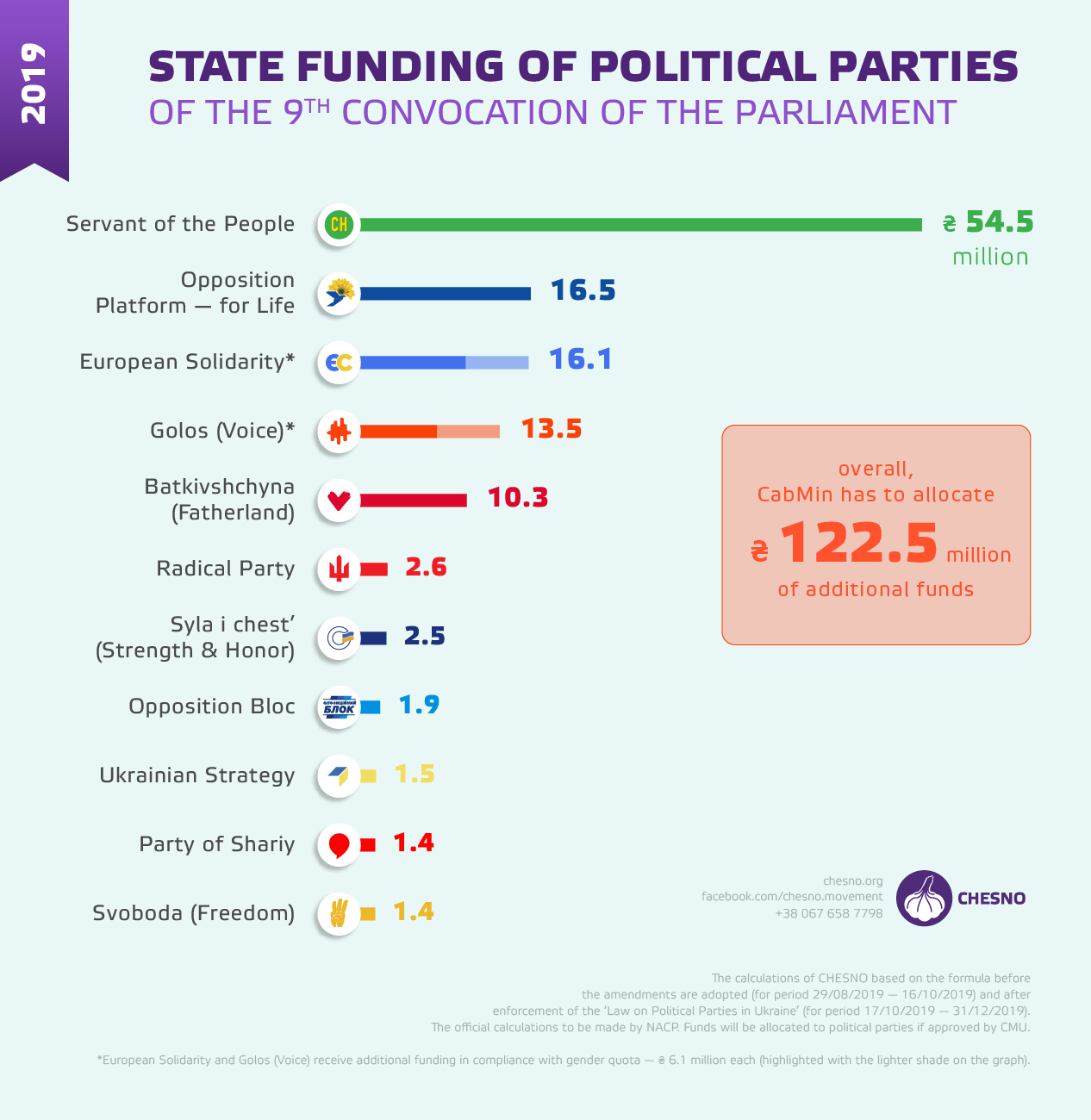 Further fate of the draft law depends solely on voting for it during the plenary session. Although position of the committee is important, voting in plenary session will be decisive. According to the regulations, consideration of proposals submitted by the President in veto provides for separate voting for each of amendments and another voting for the draft law as a whole.

At the same time, the fate of entire draft law depends on the result of voting for each proposal, because the lack of support for at least one of them will dramatically reduce chances of successful passage of the draft law as a whole. Failure of even one proposal will mean that the Parliament will have to overcome the presidential veto, and this will require 300 votes. This development of events, to put it mildly, is unrealistic.

Two other scenarios for development of events are more realistic.

The first scenario is that: contrary to the decision of the committee, the required number of votes for all 5 proposals of the President will be found during the plenary voting. The result of such voting will be successful completion of the draft law and full resumption of reporting by February 28, 2022.

The second scenario is that: there will not be 226 votes during the plenary for at least one of proposals and this will block the entire draft law, including resumption of reporting. Even if they vote for draft law 5253-1 as a whole, another veto and return for revision will await the draft law. In such stalemate there are no guarantees that Members of Parliament will return to consideration of the draft law in near future. 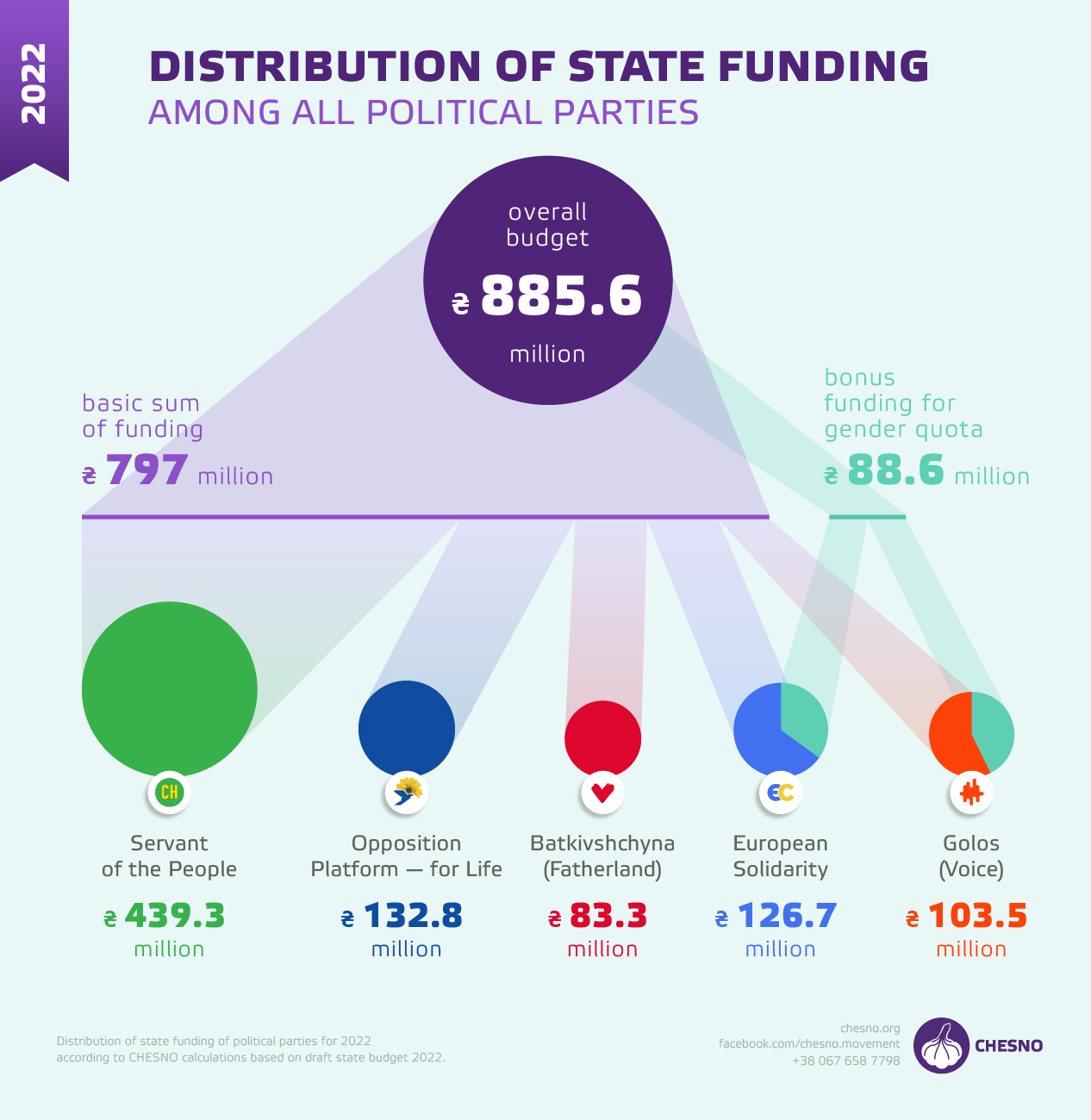 Thus, if parties receive record 886 million UAH of stat4e funding next year, they will no longer report on where they spend money. They could submit reports voluntarily (the law allows not to submit reports, but it is not the obstacle for those who want to submit reports on their own initiative). However, as practice has shown, parties do not have desire to voluntarily submit reports. As of the beginning of October 2021, only 7% of parties submitted reports, especially those who has nothing to show in the report. 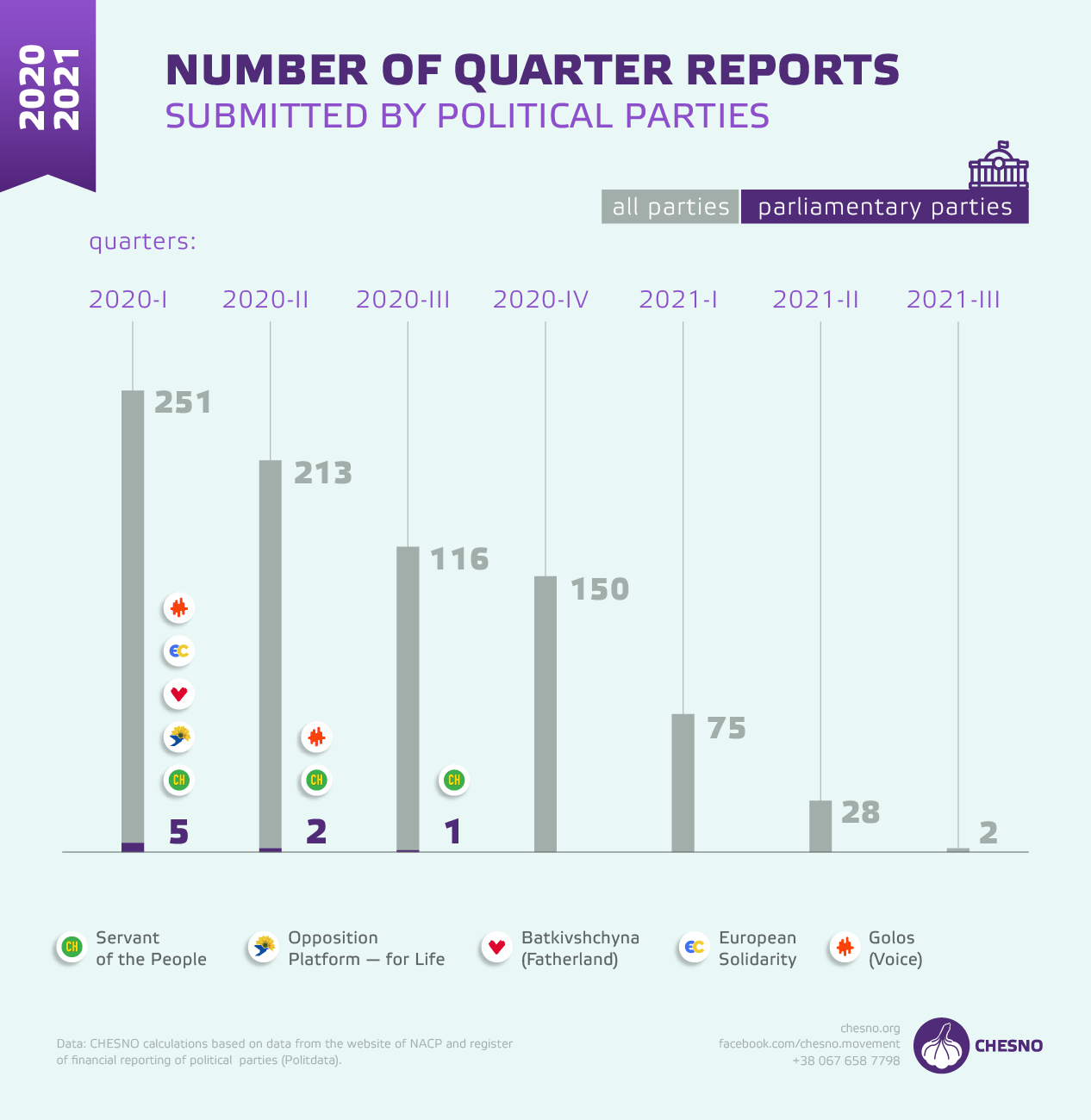 So, next week will be decisive on the issue of resumption of reporting by political parties, which will only take place if all 5 presidential proposals and the draft law as a whole receive the minimum required 226 votes. If this does not happen, we can finally state freezing of the political financing reform in 2015, which aimed, in particular, to reduce the financial influence of oligarchs on activities of political parties and their decisions within walls of the Parliament and local authorities. And in the absence of mandatory reporting, transparency and control by the NACP, state funding will turn into donation of budget funds to parties. 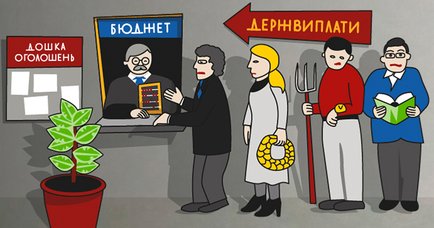 Where Do Parliamentary Parties Get Their Money?

The data about party funding have become more accessible, but its analysis shows that there isn’t more transparency in this aspect. Parties come up wit...
Read more