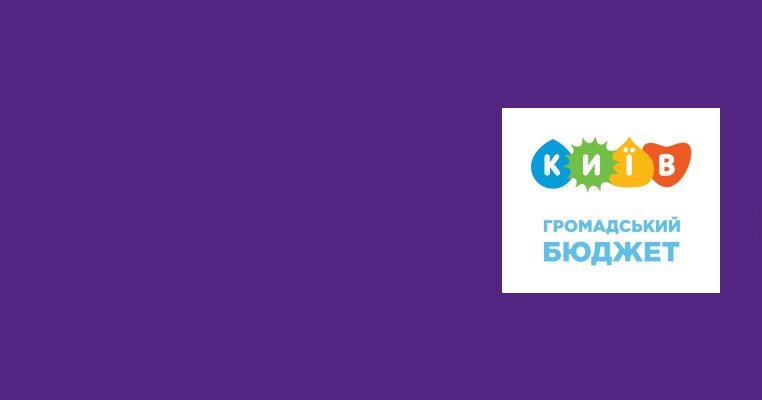 Before the local elections, candidates employ all kinds of methods to influence voters. A councilor’s PR on the Community Budget of Kyiv is a direct violation of the principle of equal conditions during the election process.

The duties of the Kyiv City Council members include rational distribution of the city’s budget of almost 60 million hryvnias and development of target programs. But councilors don’t shy away from reaching into the Community Budget as well, submitting mostly projects related to reconstruction of sports grounds or school stadiums, which should actually be included in the general city target programs, since these projects make up about 50%. With the so-called “school” projects, it’s easier to engage the audience and make parents remember you as a caring administrator. And although the fund is defined as a “community budget,” meaning that it is supposed to be planned and used by the community, councilors still take part in it.

Councilors often mark the implementation of certain projects as their own achievements. They gain political points by actively advertising Community Budget projects. And when a certain “improvement” is implemented, they never forget to remind people that it was initiated by a councilor. In fact, however, everyone, regardless of their status, can secure support from Kyiv residents and implement various projects.

The Community Budget Commission is preparing proposals to introduce changes to the Provisions on the Community Budget and wants to propose the allocation of a separate community budget for “school projects,” because at the moment, they make up 60% of all winners.

In 2020, changes to the Provisions were introduced, limiting the number of projects that can be submitted by a single author. This year, the limit is at 5 projects. But councilors use tricks and submit projects on behalf of their aides or third parties.

Current councilors can submit projects to the participatory budget, but this activity cannot be used for the purpose of political campaigning or election PR. 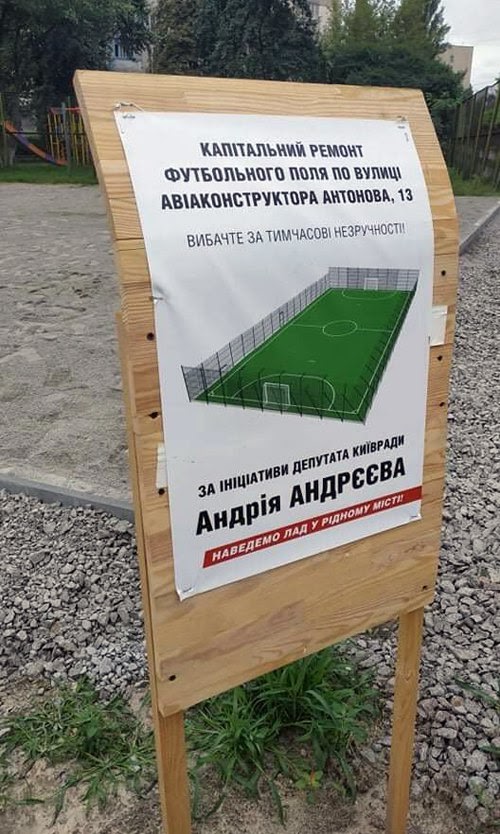 According to the methodology of the CHESNO Movement, “budget buckwheat,” or “promotion using budget funds,” is the promotion of politicians or potential candidates with goods and services, etc., procured with funds from the state or local budget, which they present/mark as their own achievement, communicate as their success, and can avoid disclosing that it was done using budget funds. But the budget is taxpayers’ money—that is, our own money.

We have also recorded Andreyev’s tents where people supposedly help collect votes for projects to make them win, but, once again, self-promotion wins here: the councilor’s name is written in big print, while the note that it’s a vote collection point for Community Budget projects is in small, barely discernible print.

In addition, the Commission first gave a warning to Yaroslav Fedorenko, and then disqualified his projects on the same grounds as the ones submitted by councilors, because he is running for the Kyiv Council, even though there is no direct regulation that prohibits candidates from participating in the competition. The Commission made this decision because of the party logo and a mention of the party leader in his ads.

Fedorenko’s billboards can be seen in the capital’s Darnytsky District. He presents himself as a member of “Oleksandr Omelchenko’s team” and claims to have implemented 53 community projects. The candidate himself explains that he did not mean only projects funded from the Community Budget, of which there were about 40. He insists that his aim was not self-promotion, he just wanted to draw attention to his activity in the district. 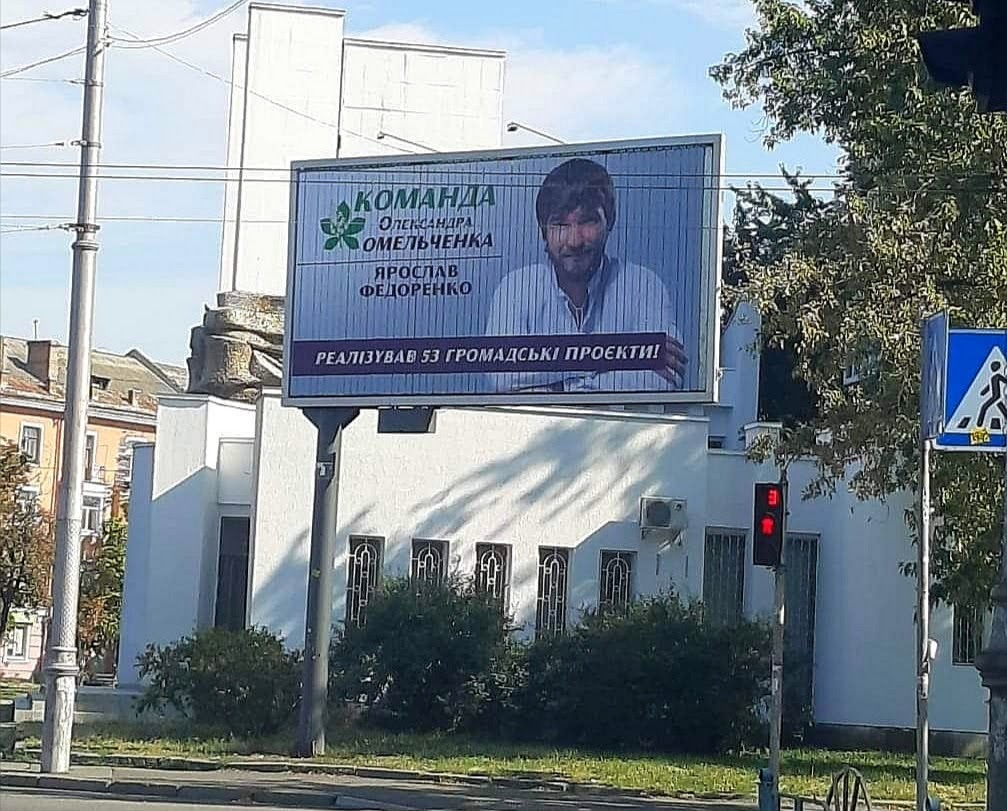 It should be noted that the Ukrainian Party Unity has recently been renamed as Oleksandr Omelchenko’s Unity.

Another 118 projects, marked by Evorank, lost the right to be implemented with Community Budget funds due to their unscrupulous authors. Evorank is a trademark that belongs to two Kyiv Council candidates, aides to MP Sviatoslav Yurash, elected as a member of the Servant of the People party. The previous Commission put them on the list of unscrupulous contestants, so they had no right to participate in the Community Budget. Their projects are not generally accessible, creating artificial competition limitations, because all of them are copyrighted. Therefore, only a certain NGO can win the tender to implement them.

We are talking about Volodymyr Basovsky and Mykola Hurin, who are the founders of the Community Budget Club NGO, which wins all of the Evorank tenders. Basovsky insists that he has no material gain from the projects because they are implemented through a non-profit, and all the funds thus obtained are reinvested in its development.

Another Evorank leader, Oleksiy Tykhonov, is an advisor to the deputy mayor of Kyiv Petro Panteleyev.

Candidate Hurin is also the founder and leader of the I Government NGO, which is the developer of the eponymous website that displays the ratings of Kyiv Community Budget projects. In the last few days before the end of voting, thousands of supporters visit the website several times a day to check the ratings of certain Community Budget projects. It seems like a good initiative, but to view the full list of ratings, a user has to give their personal Viber data to a chatbot, and they can see the full list only after registration.

The final decision and Community Budget winners were announced by the Community Budget Commission a day after the deadline specified in the Provisions, but Commission Members used a trick and did not conclude the meeting conducted on September 29 (the last day to determine the winners), announcing a break instead.

Councilor Brodsky, despite the Commission’s decision, still has not been added to the list of unscrupulous contestants.

Andreyev, Yarmolenko and Kyiv Council candidate Fedorenko handed the authorship of their projects over to other people, so the Community Commission put them on the list of unscrupulous authors and removed their projects from the list of winners, marking them as projects that received the minimum number of votes.

What is the difference? The winner projects will be implemented already in the next budget year with funds from the Community Budget, but a number of projects which received the minimum number of votes can be implemented using the funds of the capital’s general budget by the District State Administration, which is the manager of the budget funds in this case, under the condition that a decision is made that their realization is advisable.

The Public Budget Commission’s secretary Maria Nazarova noted that this is decided by the budget manager itself. For example, last year, the Solomyansky District State Administration did not fund any of the projects, while the Holosiyivsky DSA funded all of them.

Due to the fact that the Community Commission failed to meet the deadline for making the final decision on project funding, the City Working Group on the Community Budget decided to redirect it to the final authority, the Kyiv Council Budget Commission.