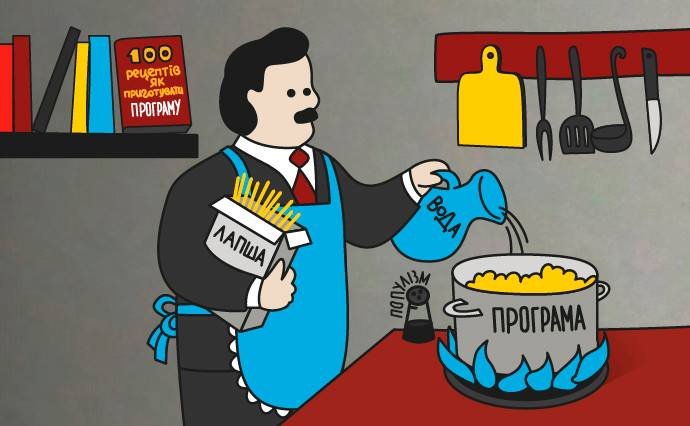 To provide every Ukrainian with a full fridge of meat and safe shawarma; to make sure that Ukrainian doctors and teachers don’t leave for Poland to scrub toilets there; to rename the country Ukrainian People’s Republic; to unite the church and the state, to hand out free bread daily; to create a tax haven and give out 5,000 hryvnias in subsidies to buy cows. These are only some of the offers from the programs of Ukrainian presidential candidates.

CHESNO has studied 44 programs and asked presidential candidates how they wrote their document, who helped them with it and how they set their priorities.

The general tendency in many campaign programs of the candidates are populist, attractive topics: high wages and pensions with simultaneous lowering of utility fees and prices, free education and health care. They do not detail how exactly they are going to provide all that. A number of promises in the candidates’ programs are not in the president’s power at all, but mostly lie within the responsibilities of the prime minister and the Cabinet.

Some presidential candidates assured us that they wrote their programs by themselves, others prepared the program together with their fellow party members and had it approved by the political council at a party conference. Some consulted with professionals or international experts.

The presidential candidate from the Radical Party, Oleh Lyashko, says that he wrote his program by himself:

“I wrote this program down from the words of a miner from Pavlograd, a farmer from Kharkiv Region, a doctor from Chernihiv and a kindergarten teacher from Cherkasy. I went underground, into a mine, to learn about the actual price of coal. I walked barefoot around a village to preserve my connection with my native soil. I soaked in the smell of the farm, so I don’t forget the taste of real milk and value the labor of milkmaids even more. I saw what hell looks like, sweating in front of an open hearth furnace.”

Lyashko promises that Ukrainians will have a “full fridge” and “safe shawarma,” and that he will stop the mess, chaos and ruin.

Oleksandr Vilkul, the OppoBloc candidate, also claims that he wrote the program by himself:

“As for the priorities of the program, they were determined by people and the situation we now have in our country. In the past year, I had about 200 meetings with people, and I know very well what people are interested in.”

Yuriy Boyko, an independent candidate and a former co-head of the Opposition Bloc faction, says that he didn’t consult professionals but wrote his program titled The Plan for the Peaceful Development of Ukraine exclusively by himself:

“I wrote the program based on what I had heard from people in the regions when I travelled across Ukraine.”

Oleksandr Shevchenko, the presidential candidate from the UKROP Party, believes that his experience is sufficient for writing a program, and he doesn’t need any advisors:

“The party doesn’t approve anything, because it’s my campaign, not the party’s. My campaign program is based on my own experience and my own work for many years. I did not consult anyone, I have enough experience of my own and my own strength to do it. I can do without advisors! We have so many advisors, but nobody who could do the work.”

The independent candidate Yuriy Tymoshenko says that he needs to amend his program, because he wrote it in haste:

“I wrote it very hastily, to be honest. I had help, and, unfortunately, it was written on the last day. And then, when I reviewed it in peace, I was shocked how I was rushed. I am strongly against selling land at any time and in any circumstances. I believe that there are dozens of ways to lease land to people for a long period, for 49 years, then for another 49 years. I am radically against the land market. We, our generation, cannot divide the land now, what about the next generations?”

At the beginning of 2019, Volodymyr Zelensky, a TV personality, producer and presidential candidate, published a video address in which he called on his voters to help him write a campaign program.

Social media users actively proposed their ideas and shared what they believed to be the key problems in the country. But in the end, the official program of Volodymyr Zelensky included very few of the suggestions from the social media commenters.

Zelensky’s team claims that they studied all the 10,000 comments with suggestions, and then the candidate, together with professionals, determined how realistic it was to implement each of the suggestions. In the end, about 60 percent of the suggestions were incorporated in one form or another.

“By analyzing email messages and comments — we developed special software that pulled all the comments into a single document — we collected information about thousands of problems. The software’s page on our website contains links to the comments which we used. Actually, there are many more of them,” said a representative of Zelensky’s press office.

Maryna Soroka, the press secretary of Yulia Tymoshenko, says that a program for a presidential candidate is an enormous amount of work done by many people. In the case of the program of the leader of Fatherland, many professionals worked on it:

“The New Economic Deal was prepared for four years by over a hundred Ukrainian economists and financiers. Then the chapters were discussed and amended in professional circles and in the regions. Over a hundred experts worked to prepare the draft of the new Constitution.”

And the development of the documents that became the basis for the program of the Osnova candidate Serhiy Taruta involved about 50 economic researchers, business representatives and experts in international relations.

According to Illia Kiva, the Socialist Party of Ukraine candidate, he prepared his program together with experts and fellow party members “who have enormous experience in different areas.”

Unfortunately, voters still don’t pay much attention to campaign programs before they vote. Rather, they look at the personal qualities of candidates, such as appearance, charisma and public speaking skills. Because of the low interest on the part of voters, the politicians’ programs sound more like “for everything good, against everything bad.” 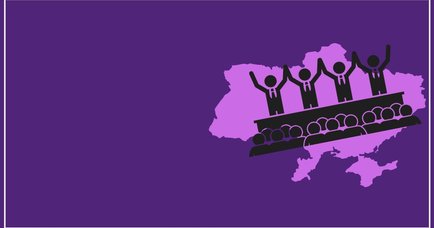 Since Leonid Kuchma’s presidency, none of the presidents was re-elected in Ukraine for the second term. This means that none president was able to reta...
Iryna Fedoriv 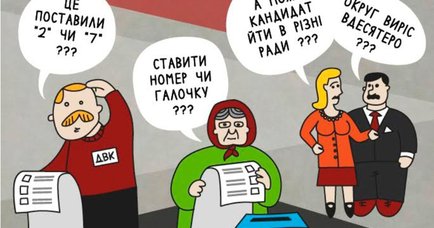